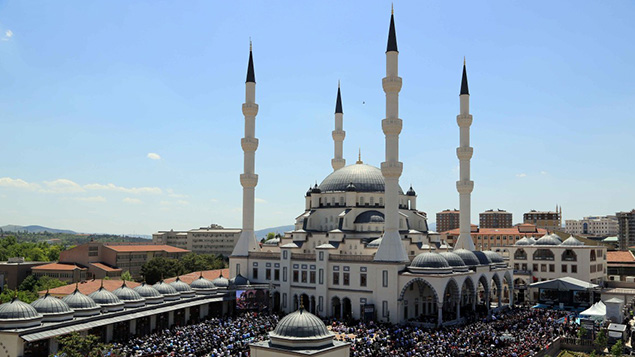 The mosques of Allah shall be visited and maintained by such as belief in Allah and the last day, establish regular prayers, and practice regular charity, and fear None (at all) except Allah. It is they who are expected to be on true. AL TAWBAH 18.

Foundation culture, which has an important place in Islamic civilization, has been a pioneer in the construction and maintenance of mosques until today, especially during the Seljuk and Ottoman Empire periods. Turkey Diyanet Foundation, which constitutes a solid link of the foundation tradition today has continued this blessed tradition with its mosques and educational buildings built in Turkey and abroad since its establishment.

Until today, it has built over 100 mosques and education buildings in 25 countries abroad. In our country, TDF built nearly 4 thousand mosques, nearly 500 Mesjids, nearly 3 thousand Quranic courses, and education centers.

The Turkiye Diyanet Foundation, which builds unity spaces that bring together the hearts with each member of the ummah did not limit the construction activities of mosques and education centers to our country only; TDF continued its mosque abroad activities in Crimea, Caucasus, and Balkans, which it started with the Turkish Republics that gained independence with the dissolution of the Soviet Union, and carried these activities to the countries of Africa, the Asia Pacific, and South America, which are the peace points of our heartland today.

The Turkiye Diyanet Foundation, which is the flagship of the construction of mosques in our country and abroad, is building mosques for Muslims who long for the sound of prayer today in countries such as the USA, England, Russia, Haiti, and Belarus.

Mosques have been the institution representing all the principles and messages of our great religion, Islam, both in structure and function since Asr-ı Saadet. As in all our activities, it cooperates with our Presidency of Religious Affairs in the field of mosque constructions; We aim to make Muslims live in unity and solidarity.

We would like to invite you to support us so that there is no one left longing voice of Azan, and to build the friendship of the people of our hearts, all the way to the free zones.