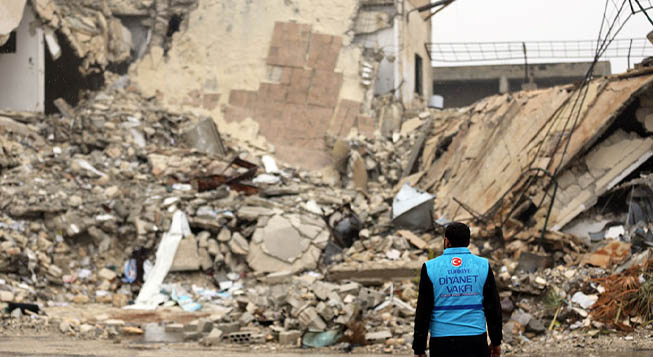 The situation of our brothers and sisters who have been victims of the political crisis and war in Syria, which began in 2011 and one of the greatest humanitarian tragedies of the century was experienced continues to be grave. Intense bombardment, on the one hand, the housing problem on the other hand does not offer many options for families to live.

With the support of our charitable nation and the leadership of our Presidency of Religious Affairs, we have developed and implemented projects in many fields, from education to health, to relieve the pain of our Syrian brothers, with whom we have lived together for centuries and to solve their problems.

In the immediate aftermath of the crisis, we have delivered 265 million Lira of aid supplies to the refugees living in camps to heal the wounds and meet the needs of our Syrian brothers and sisters who have been victims of war since 2011 with the "Now is the Time to Help Syria.", and "Now is the Time to Help the Turkmens.", "Now It's Time to Heal the Wounds", "Don't Let Humanity Die in Aleppo" and Syrian aid campaigns.

We carry out distributions in the region with our partners.

Turkiye Diyanet Foundation, which has been operating in the region since the first moment and conducts planning and determination of needs, visits orphanages, camps, tent cities, and houses across the border with its teams and partners in the region, and delivers cash donations to the needy with the in-kind aid that are the entrusted of our nation.

We continue our work by distributing food, cleaning, shelter, kitchen products, and clothing for families who are in need due to the war.

In addition to these, hot meals for 15 thousand people and 160 thousand bread are prepared daily in the logistics center of Turkiye Diyanet Foundation and bread bakeries in Syria and delivered to families who are affected by the civil war.

So far, 47,239 Qurbanies have been sacrificed and distributed to families in need during Eid al-Adha and in the following months, while 184,200 people have been welcomed at iftar tables during Ramadan.

We drilled a total of 10,000 water wells in the regions where drinking water shortages are experienced at the stage. In addition, we continue to heal the wounds of the local people with the clothing and food store we have created.

Within the scope of our activities to support religious services, together with our Presidency of Religious Affairs, we carried out renovations and furnishings of 467 mosques destroyed in the war in In Jarablus, Al-Bab, Azaz, and Afrin regions.

Permanent Houses Will Be Built

Families forced to leave their homes due to the bombardment are struggling to survive in extremely bad conditions due to rain, mud, and cold weather in olive groves. Life intents are quite difficult, especially in winter.

Especially in winter, life in tents is very difficult. We will build permanent residences together with other non-governmental organizations in the region by developing the housing project we initiated for orphans and their families in Idlib. Faster and healthier accommodation will be provided for the cost of the tent. We aim to prevent families from staying outside in rain and cold by starting the construction of 30 square meters of low-cost residences quickly.

We hope for the Future with Education.

As Turkiye Diyanet Foundation, we have contributed to the education of thousands of students by building 6 schools in the region within the scope of our educational activities in Syria. We provide shelter and services to 2,100 orphans in 4 camps including Iman, Hz. Ayşe, Zemzem, and Bethlehem villages. Within the scope of our health studies, we have provided treatment and drug support to 60,000 patients. It will also be opened at Ammar bin Yasir Primary School, which has a capacity of 1,000 students in 20 classrooms, for families who have come to the border with the latest attacks from Idlib region."

By supporting these campaigns, you can help our victims and oppressed brothers and sisters who are oppressed in the face of the severe human tragedy.