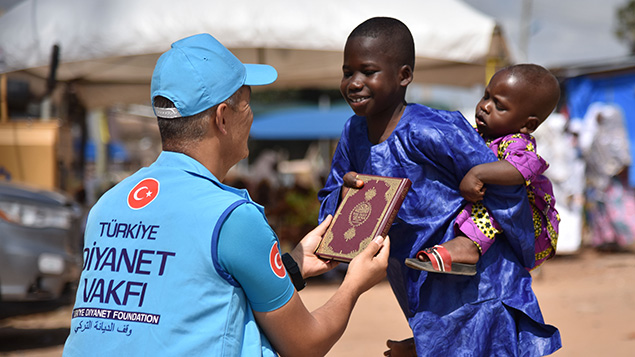 My Present Is Quran

The program "My Present Is Quran" was initiated by the Presidency of Religious Affairs to reach as wide an audience as possible, to support efforts to read and understand the universal message of the Holy Quran, and to spread the awareness and culture of the Holy Quran in our community and the Islamic world. Within the framework, our Foundation has exceeded the first target of the Quran with 1 million translated versions.

Do not leave a place on the earth where the Holy Quran has not reached.

Within the scope of the project, we act with the aim of leaving no place on earth that our guidance Quran has not reached. In this context, the financing of our project is obtained through our donors. Donations are made with different donation methods in the amount of 50 TL of a Quran price. Approximately more than 2 million donations have been received so far and our Quran in different languages has been sent to 85 countries in Asia, Africa, the Balkans, the Middle East, and the Caucasus.

OUR PRIORITY IS INSTITUTIONS THAT NEED THE HOLY QURAN.

Abroad, requests are being taken from madrasahs, mosques, Quran courses, and universities are evaluated within the scope of the project, primarily in "Africa, Balkans, Asia, as well as Latin American countries, Caucasus, Asia pacific countries". In the country, we continue to present the holy Quran in Turkish version to schools, dormitories, hospitals, and prisons.

The Holy Quran is a version of all languages of the world.

Within the scope of the project, translation editions in different languages such as Turkish, English, French, Spanish, Russian, Bosnian, Azerbaijani, Kyrgyz, Kazakh, Persian, Amhercie, Bambara, Chekhovian, Darian, Verş Kıraatı, Tamil were completed, printing in local languages, such as Malalayamca, Nepalese, Bengali, Hausa, is still being performed. Besides, periodic requests from Turkiye and abroad in general and local languages are also evaluated.